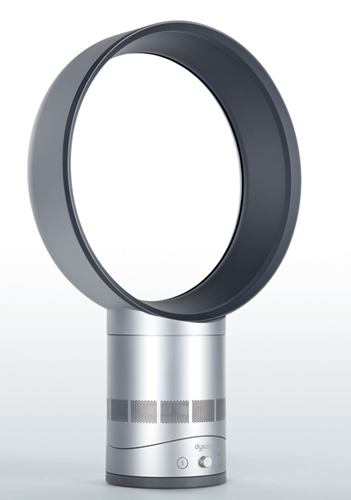 Why Bladeless Fans Are Superior to Bladed Ones

If you’ve recently passed by a store window display or had an ad pop up on your screen with a curious-looking appliance claiming to be a bladeless fan, you may be wondering what on earth that is and why you should prefer it to traditional bladed devices. To help you sort these questions out, we have compiled a handy list of the advantages of bladeless fans over bladed ones.

Before we dive in, however, let’s first explore the basics of the technology behind bladeless fans and the two main bladeless fan types currently on the market.

How Do Bladeless Fans Work?

Bladeless fans are not, in fact, bladeless — they have a number of tiny, asymmetric blades hidden within their base. Bladeless fans are also known as air multipliers, which is perhaps a more accurate term considering their mode of operation.

These contemporary fans work by drawing in outside air through openings at their base using a compressor. The motor-powered blades then direct the air upward at a high speed through the hollow shaft and toward the ring.

Once the airflow reaches the ring, it propels outward through a slit that surrounds the ring. The shape of the ring is similar to that of aircraft wings: it slopes slightly so that it generates negative pressure, which then allows it to draw even more air in. That leads to an effect known as air multiplication or air inducement.

What’s more, this process causes the air around the fan to also start moving in the direction of the airflow generated by the ring. This phenomenon is known as entrainment.

Overall, all of this results in a rapidly accelerated, high-pressure, multiplied airflow that is up to 15 times stronger than that of a bladed fan.

What Are the Main Types of Bladeless Fans?

How Are Bladeless Fans Superior to Bladed Ones?

When it comes to fans — or any appliances for that matter — safety is the number one concern for any household with young children, pets, or absent-minded adults glued to their phones. While bladeless fans are not actually bladeless, they have no external blades that could pose health and safety risks. Cutting your fingers or getting your hair caught in the blades is now a thing of the past.

Bladeless fans can be up to 75% quieter than bladed ones. That is due to their patented air-multiplier mechanism that allows them to generate powerful airflow with minimum noise. You can watch TV, listen to music, make a phone call, and even sleep without any disturbance from your fan.

3.    Bladeless Fans Are Easier to Clean

More blades mean more dust to wipe. Gone are the days when you had to unscrew the blades’ grille cover only to then painstakingly wipe each and every individual blade. The bladeless design not only makes cleaning your fan much easier but also means that a lot less dust settles on its surface.

Most bladeless fans currently on the market have a sleek and compact look that makes them suited for any-sized room, desk, or tabletop. They would fit in neatly in your office, kitchen, bedroom, or living room without taking up too much of your precious space.

Bladeless fans are much lighter than traditional ones. They are easy to handle and carry around whenever you move house or simply feel like changing up your interior. What’s more, if you were to ever drop a bladeless fan on your toes, it wouldn’t hurt nearly as much!

Traditional fans tend to “chop” the air with their blades. That gives rise to an effect known as “buffeting,” whereby the incoming airflow feels “chopped up” or interrupted by alternating weaker and stronger bursts. Some people enjoy this effect, but most find it annoying.

In contrast, bladeless fans are able to generate a smooth, uninterrupted breeze. That is due to their streamlined design and the fact that they have no blades to chop the air with.

The special design of bladeless fans minimizes the pressure exerted on the motor. That helps lower energy costs while at the same time guaranteeing superb performance.

Bladeless fans have no extra parts such as grilles or filters. They do not require routine replacement of any parts and are easy to clean with nothing but a wet cloth.

You can control most bladeless fans via an infrared remote control. This device allows you to effortlessly switch the fan on and off, regulate the strength and direction of the airflow, change speed settings, and set automatic timers without as much as getting up from your couch.

11.  Bladeless Fans Are a Beautiful Sight to Behold

When it comes to looks, bladeless fans have virtually no competition out there. They boast a sleek, modern, and state-of-the-art appearance that is virtually unmatched. However, bladeless fans always retain a certain minimalist and unassuming air that helps them blend in perfectly with any interior.

A bladeless fan would fit in effortlessly anywhere in your home and office. It’s the perfect addition to place on your workstation or bedside table, next to the living room couch, or on the kitchen counter-top. It will both cool you off and improve the aesthetics of your interior. Give it a try, and the results should surprise you pleasantly!