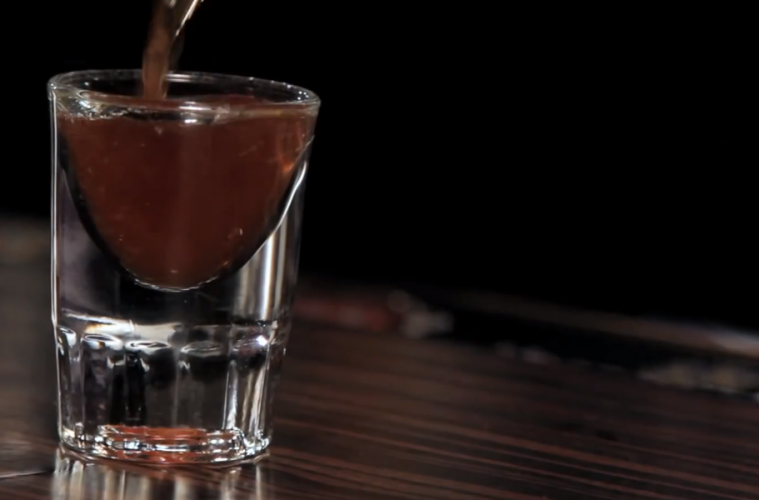 Get the party started with a few great shots or shooters for you and your friends. There are many quick and boozy drinks for you to choose from and the Liquid Cocaine Shooter is one of them. It is considered one of the best party shooters and it is sure to be a hit at your next party.

So, what’s the difference between a shot and a shooter? While shots contain only alcoholic ingredients, shooters are short and potent drinks that are mixed with a combination of liqueurs, spirits, and non-alcoholic mixers. It’s a technicality, but you can use it as trivia to stump your friends someday.

This infamous bar shooter has its name because it is filled with strong flavored and potent liquor which might encourage drinkers to hanker for more. While it should go without saying, drinking too many this shooter can cause you get you very drunk, often before you know about it, and should be done in moderation. Remember to drink the shot or shooter responsibly and designate a driver.

Here are three ways to make a Liquid Cocaine shooter.

This simple version of the Liquid Cocaine shooter is made from three ingredients: cinnamon schnapps, peppermint schnapps, and Jägermeister. We all aware that shooters are not always the best tasting drinks. And this cinnamon, peppermint, and jager mix is decent. The taste will catch the unsuspecting drinker by surprise and you may want to have a chaser nearby. This version of the shooter is definitely a shooter you will not forget. Just make sure you don’t have too many of them so you don’t forget the party.

Cinnamon schnapps, which is a distilled spirit flavored with cinnamon, is the sweet and delicious liqueur. It has a taste that hard to resist, especially for those who are the fan of hot cinnamon candies. The popular brand of cinnamon schnapps is Goldschlager and Hot Damn which can be found in most liquor stores.

Jägermeister is an herbal German liqueur that is a complex of 56 herbs, fruits, roots, and spices. It should be served icy cold to tame its assertive herbal flavor. It tastes pretty much exactly like the new dark blue Nyquil except not as thick.

Another common version of the Liquid Cocaine shooter is to throw the Peppermint Schnapps. Which means this new version of the shooter is made from only two ingredients: cinnamon schnapps and Jägermeister liqueur, and you need one shot of each to make this shot for two.

If you like the flavor combination ( and, really, who doesn’t?), there are other ways to make the Liquid Cocaine shooter. You will need several different ingredients for this recipe: Jägermeister, Goldschlager, Rumple Minze, and Bacardi 151. The rumple minze might be the strongest taste, the Jägermeister is probably the least. This potent shooter is not for the faint of heart. Make sure everything is very cold and drink responsibly.

Bacardi 151 taste like rum and fairly good rum at that but SUPER STRONG. The initial taste isn’t really that bad but then it is like fire going down your throat. That’s why people often use it in mixed drinks instead of drinking it straight up.

Goldschlager is a Swiss cinnamon schnapps, a liqueur with very thin, yet flakes of gold floating in it. The actual amount of gold is very small and the German word Goldschlager actually means “gold leaf maker”. Goldschlager almost tastes like cinnamon and it is considered one strong cinnamon beast of a liqueur.

You can taste the cinnamon of the Goldschlager, and then the peppermint flavor of the Rumple Minze seems to make a return as it tastes like you just ate a mint. Rumple Minze is the most popular 100-proof peppermint schnapps.

1. Grab some ice and throw it in a cocktail shaker. You will be straining the ice out when you pour the drink. If you’d like ice in your drink, fill the shot glass with ice now.
2. Pour the ingredients into the shaker filled with optional ice.
3. Close the cocktail shaker and shake it vigorously for a second. Keep your hand over the lid of the shaker so that it does not accidentally pop off.
4. Strain into three chilled shot glasses.

For this version of the Liquid Cocaine shooter, you will need a variety of hard liquors (not liqueurs): silver tequila, unflavored vodka, light rum, gin and everclear® alcohol. Typically, this recipe is not chilled. However, if you want it cold, fill the cocktail shaker about halfway with crushed ice.

This version of the liquid cocaine shooter is also one of the most potent shooters you can find. Thus, do not drive home if you drink this shooter.

Vodka is the most common distill spirit, often found in mixed drinks. Its popularity comes from the general characteristic that is it tastes like almost nothing. This allows the other ingredients of a drink to become the focal point. Since vodka is like water, a stylistic difference in brands is their texture on the tongue, we often call this a liquor’s mouthfeel.

Gin is pretty much just flavored vodka – but the best kind possible. Drinkers often describe gin as being the liquid form of a pine tree. But to me, it tastes like rubbing alcohol mixed with fruit extract.

Silver tequila, also known as white tequila is named so because of its appearance. It looks clear like vodka. Silver tequila is often considered bottom rung as it has not been aged and is often harsh. It is used for mixing, especially for cocktails as the mixtos have a harsh taste.

Rum was first created in the Caribbean and has been popular worldwide. Light rums have a sweet but subtle flavor and are typically used in cocktails or mixing drinks while darker rums are used for sipping or drinking straight.

Everclear is almost 100% alcohol and tastes exactly like good vodka, which means that it is tasteless, odorless and is clear. For the taste as well as safety purposes, Everclear is commonly used in cocktails or fruit juice blends.

As you can see, there’re a lot of ways to make this boozy drink. Choose your favorite one and enjoy your party!