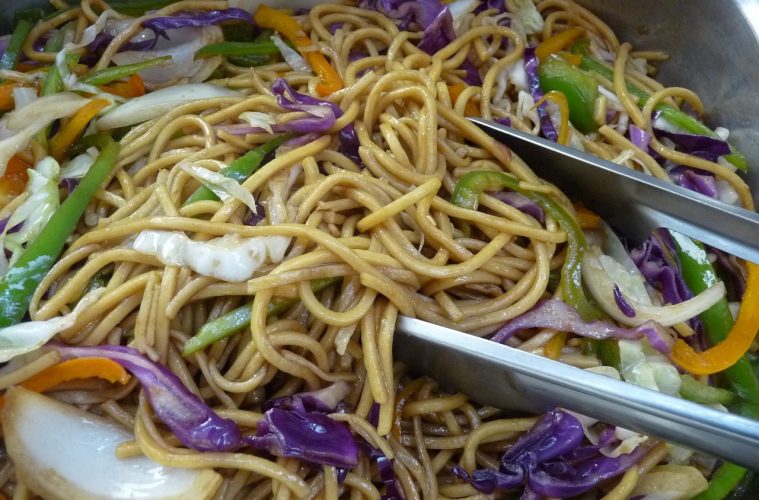 What’s the Difference Between Lo Mein and Chow Mein?

Many people assume that the main difference between Chow Mein and Lo Mein is the type of noodles that are used.

Actually, the main distinction between these two popular dishes is that different methods are used to make these stir-fry noodles.

“Mein” or “main” is simply the Chinese word for noodles, so whether you order lo mein or chow mein, you will end up with egg-enhanced wheat noodles on your plate.

“Chow” is a cooking method that means stir-fry, and “lo” literally means to pull out of the water.

From there, we have…

Lo mein (tossed noodles) is made by stirring noodles into a vegetable and meat or seafood without stir-frying them. It is a popular take-out food in American Chinese restaurants.

And you know what?

Most authentic versions of chow mein have soft noodles while chow mein with thin crisp noodles is a staple of many Chinese take-out restaurants. The main difference between the two comes down to frying time: for dryer, crisper noodles, add more oil and increase the frying time.

Type Of Noodles Are Used in Two dishes

If the Chinese noodle isn’t available, you can use Italian pasta such as fettucini or linguini as a handy substitute.

There are two types of egg noodles, fresh egg noodles (preferably about 1/4-inch thick) are best for lo mein, and dried egg noodle are commonly used for chow mein. Either way, the noodles need to be softened in boiling water before using.

The fresh egg noodles need to be softened in boiling for 2-3 minutes before cooking while the dried noodles need more time to be parboiled, about 5-7 minutes. The exact amount of boiling time will depend on the thickness of the egg noodles, so be sure to follow the package instructions if available. But no matter how long it takes, the final goal is to boil them until just cooked but not over soft.

As mentioned above, cooks start with either fresh or dried noodle, which is then parboiled.
For the chow mein preparation, the parboiled noodles are added to the stir-frying meat and vegetable combination and cooked until crispy (The authentic Chinese mein food method).
The chow mein noodles can also be stir-fried with the mixtures.

With lo mein, the parboiled noodles are added near the end of cooking to heat through and toss with other ingredients and sauce. Lo mein noodles are known to soak up the sauce.

Since the sauce is the real star, it’s not surprising that Lo mein recipes often use more than chow mein recipes.

Chow mein is stir-fried whereas lo mein is only tossed in not stirred.

Lo mein makes use of more in thicker sauces than the ones used in chow mein.

Which one is for you?

It all comes down to your personal taste. Lo mein dishes typically include more sauce than chow mein dishes do. On the other hand, you will get a greater variety of texture in a chow mein dish. For example, crunchy noodles and celery are often combined with bean sprouts, mushrooms, and tomatoes.